Thanks to everyone who attended the GlobalDrumDay 2012 (sponsored by Sabian, Vic Firth, Yamaha, Natal, Aquarian, and drumteacher.com) where we watched, listened, and interacted with some of the top leaders in percussion and music education! It was great to see so many students, working percussionists, parents and teachers present on this Friday afternoon. Heres a quick recap: Arnie Lang, NY Philharmonic percussionist under Leonard Bernstein, invited drummers up to play. Arnie gave them insight into playing "musically" and dynamically. Arnie also spoke about his drum designing. Dafnis Prieto, (MacArthur Genius Award 2011, NYU Music dept.) played Merengue from DR, Rumba from Cuba, and Plena from Puerto Rico with mastery. Swiss Chris, showed us how polyrhythmic drumming evolved from Africa to Afrobeat, Hip Hop, and demonstrated exercises from his new Modern Drum Set Stickings book (Cheery Lane). The LREI HS Drumline, opened the show with a short presentation and hosted the full event. Vin Scialla closed the event, and demonstrated Middle Eastern styles from ancient frame drums to a new approach of playing these on the drumset, currently a book in development (Drumteacher.com). By the end we had everyone tapping sophisticated rhythms in 10/8 and 9/8. After the event, students and clinicians were still drumming in the arts space all together, until Friday night! cheers, and get ready for the next one! globaldrumfest.com drumblogs.com

Posted by liftoff: drummer at 6:49 AM No comments:

space is limited, rsvp: info@drumteacher.com
Posted by liftoff: drummer at 7:05 PM No comments: 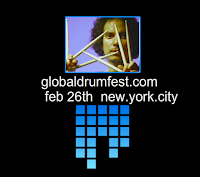 Sun FEB 26th: Moreto be announced for the 1st annual globaldrumfest.com Free drum clinic event in NYC.
RSVP here and get up to date info on the festival: info@drumteacher.com
Posted by liftoff: drummer at 9:12 PM No comments:

Posted by liftoff: drummer at 8:01 PM No comments: